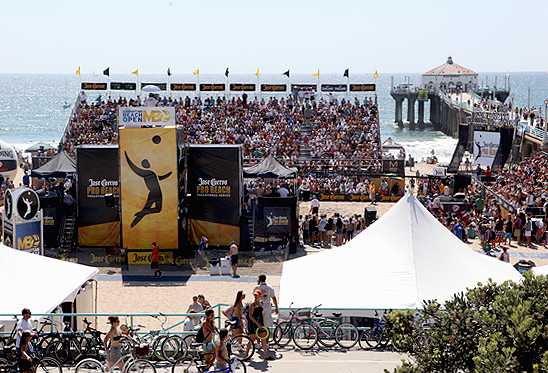 Hooray! The Cuervo Tour, along with IMG, is back for 2012! They have released a 7 stop nationwide tour showcasing the top beach volleyball athletes. As a player, I am very excited that there are an additional 7 stops for this season. They are bringing back the traditional stadium format and video taping the finals on Sunday for the NBC Sports Network. The prize money will be $75,000 per event, which probably isn’t enough to bring in the Olympians like Todd/Phil and Misty/Kerri (unless they give them an appearance fee).

I think it will be an interesting season on both the men’s and the women’s side. Expect to see a lot of partner changes and a variety of winners, just like last year. Looks like each draw will be 32 teams per gender with an on-site qualifier. That’s not confirmed, but I think it’s pretty likely with a big setup like this. Admission is free to all the events, which means you have no excuse to not come watch!

It’s nice to see that there are some West Coast tournaments scheduled and that the prize money is a little higher than the NVL. I know all the players are hoping that the NVL will get another big sponsor and match or exceed the Cuervo tour’s pot o’ gold. Stay tuned for updates, as it seems inevitable that there are schedule changes within the beach volleyball world…